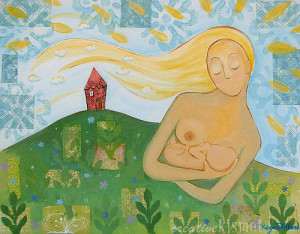 Strength, Endurance, and Support for All

Let me preface this with my story is not normal, nor is it common and it’s a bit long.

I am a nursery/nicu nurse with plenty of experience to feel completely prepared for what, I thought, was about to happen when I had my son. I knew what was normal, what to expect, and how to take care of newborns before I ever got pregnant. In fact, I may have taken care of some of your babies.

So let us fast forward a bit. My pregnancy was normal with no major complications other than major heartburn and being sick and nauseous all but about 6 weeks of it. I was so excited and happy that I was pregnant and going to have a little one that it was all worth it.

I chose not to write a birth plan because I worked with everyone that I would deliver with and they knew what I wanted. I ruptured and went into labor on my own at home and by the time I got to the hospital I had technically been in labor for 5 hours. Well, 18 ½ hours later, I quit making progress and ended up with a c-section. I was so upset and disappointed, which unknowingly would only be the first part.

I had a sweet little 7 lb 4 oz boy and was in love with him! He was perfect, had all ten fingers and toes and was doing great. Breastfeeding on the other hand was harder than expected.

He had difficulty latching and we ended up using a shield and things improved.

He started getting jaundiced. At 48 hours he had his Newborn Screening (PKU test) and Bilirubin level (jaundice) drawn. His level was at 9.8, I chose to supplement with a small amount of formula to increase his intake in order to increase his output to lower his level faster.

We discharged home after 48 hours instead of 72 hours and had our follow up appointment scheduled for the next morning, we were on track and everything seemed normal.

The follow up appointment went ok. He had lost some more weight and was more jaundice. The doctor ordered another bili level drawn, it was 15.

That afternoon we started home phototherapy, again another disappointment. The night went horrible! He started spitting up and had diarrhea , and at about 4 am it looked dark brown like it had blood in it. I called the pediatricians office as soon as it opened and got a same day appointment to go in. I was so worried and had cried on and off all morning.

At about 7:30 the home health nurse came and drew another bili level. We got the result right before we left to go to the pediatrician and it went up to 17.8. I, of course, was disappointed again. Meanwhile, I had still been breastfeeding and supplementing with formula.

We went to the pediatrician office and were admitted to the hospital for phototherapy, which is much stronger than home phototherapy, all I could do is cry. It seemed like everything kept going wrong.

I was ordered to breastfeed every 2 hours because my poor baby had lost more weight and was so jaundiced. The night went better in the hospital, we breastfed every 2 and supplemented, had several voids and a couple of stools. By the morning he weighed 5lbs 6 oz and his bili was down to 11, but he still remained sleepy and his skin had a greenish tint of residual bili. However, we were discharged at lunch.

We went home and visited with family. Feedings became more difficult. I couldn’t get him to hold anything down, breastmilk or formula, he threw everything up right after feeding. He became gray, had very little tone, and would not open his eyes. I knew where we were going next. I had my husband call the pediatrician to let her know what was going on. She told us to go to the pediatric ER, where I had already planned on going.

It was 6pm and we arrived at the pediatric ER, they were waiting on us from our pedi’s phone call to them, and asked if we were the parents with the 6 day old.

They whisked him away as we followed. He was so tiny on such a large stretcher, I felt and was helpless. The ped ER team was amazing. He had a nurse or doctor at every extremity doing something or collecting blood. He had every test done on him. We ended up being admitted to the Pediatric ICU.

Disappointment is nothing compared to what my husband and I felt. We chose to go home for a bit of sleep and knew he was in great hands. I had a pump and started pumping as soon as we got home. We got up feeling better and chose to go to church before heading back up to the hospital.

On our way to church we got a call from the PICU asking for consent to give blood products and that our little one was in liver failure and could go into DIC and die at any time.

The feelings….. anger, sadness, disbelief, hatred, everything you can think of….. they were all felt at that moment. We took the turn to the hospital and all I could think was how could this be happening and that it wasn’t fair.

We got to the hospital and our little one looked fine, with the exception of having 3 IVs and wires to the cardiac and respiratory monitors. He had several more test ran on him, including a spinal tap, they couldn’t figure out what was wrong with him. We met with a several specialist including a hematologist (hemophilia runs on my mother’s side of the family) and a gastroenterologist, who told me to continue to breastfeed and supplement as needed because he didn’t think whatever was going on was caused by my breastmilk.

Fast-forwarding a bit, we were transferred out of the PICU to the pediatric floor, which was short-lived. Our pediatricians wanted to transfer us to Birmingham Children’s hospital, however we had requested to be transferred to Vanderbilt since we knew people in the area that would be willing to let us stay with them.

Unfortunately, Vanderbilt would not take us in case a liver transplant was needed. The same afternoon my husband received a call from our pediatrician while I was bottle-feeding pumped breast milk. Without any words or hesitations my husband reaches over and pulls the bottle out of my hands and our little one’s mouth. He got off the phone quickly and then told myself and our family what was going on.

Our pediatrician called to stop all breastfeeding and formula feeding immediately because he had just received the preliminary report from the State Newborn Screening that our little boy had Galactosemia. I can honestly say I had no clue what that was.

We started looking at the internet trusted medical sites my doctor-father-in-law and nurse-brother were able to get to. We learned some basic important information very quickly; Galactosemia is an inherited genetic disorder, in which the body doesn’t produce the enzyme to break down the simple sugar galactose, which is one of the simple sugars that lactose breaks down in to. I couldn’t keep from crying, it was all I could do. I was heartbroken that I couldn’t breastfeed and even more that my son had something wrong with him and I felt that I had caused it. To top it off soy-based formula was brought to me right after being told all of this news.

We transferred to the NICU at Children’s Hospital in Birmingham that night. By the time we got down there it was very late but we went to the NICU to visit and see where our little boy had been taken. We had to wear gloves and gowns for days anytime we visited him. He had more IVs and a central line put in. He wasn’t allowed to feed to allow his gut and liver time to rest and heal, he was given everything through his central line and IVs. My boy was getting everything he needed! We were very blessed by having to go to Children’s Hospital since the geneticists and nutritionist we would end up following up with was there.

While at Children’s we received our official confirmation for Classic Galactosemia from some genetic testing that was collected. Feedings were resumed after about 3 days with soy-based formula. Improvements were made each day in labs, weight, and general condition. We were finally discharged after 6 days. We were given plenty of soy-based formula by our nurses and nutritionist to last over a month. We had the support we needed to move forward.

Why is this story here for Breastfeeding week?

My experience changed my view of breastfeeding and how I thought.

Before my son was born, I couldn’t understand why anyone wouldn’t breastfeed their child. Now, I don’t question the choice to formula feed. I HAD to do it and my son is a healthy, smart, energetic, almost 3 year old.

While I still think and believe that breastfeeding gives a child everything he or she needs, it is still a mother’s choice to do so.

I use this experience to help new mothers and share quite often. I support the mother in her choice to breastfeed or bottle-feed and in some cases to let them know supplementation is not the end of breastfeeding.

Though my breastfeeding only lasted 10 days, I wanted more. I will stand by a mother’s bed assisting in positioning, helping ensure proper latch-on is achieved, and encouraging the mother to aid in a good start to breastfeeding for them. I want mothers to feel comfortable and at ease when I leave them and they leave the hospital, as well as for them to know they can call for help if needed.

I love my job as a mother and nurse, and am blessed to do what I do. If I am able to breastfeed with the next child I have, I will, if not it won’t be as big of a let down, pun intended, as the first time. I hope to continue to help new mothers and experienced mothers with for many years to come.

If you have a story you’d like to share, please go to https://www.facebook.com/AdaptiveMom and leave it for me in a message by August, 6 2013. After that date, feel free to share your own stories in the comments below. Thanks!

2 Comments so far. Feel free to join this conversation.